A LOOK BACK AT LAST WEEK 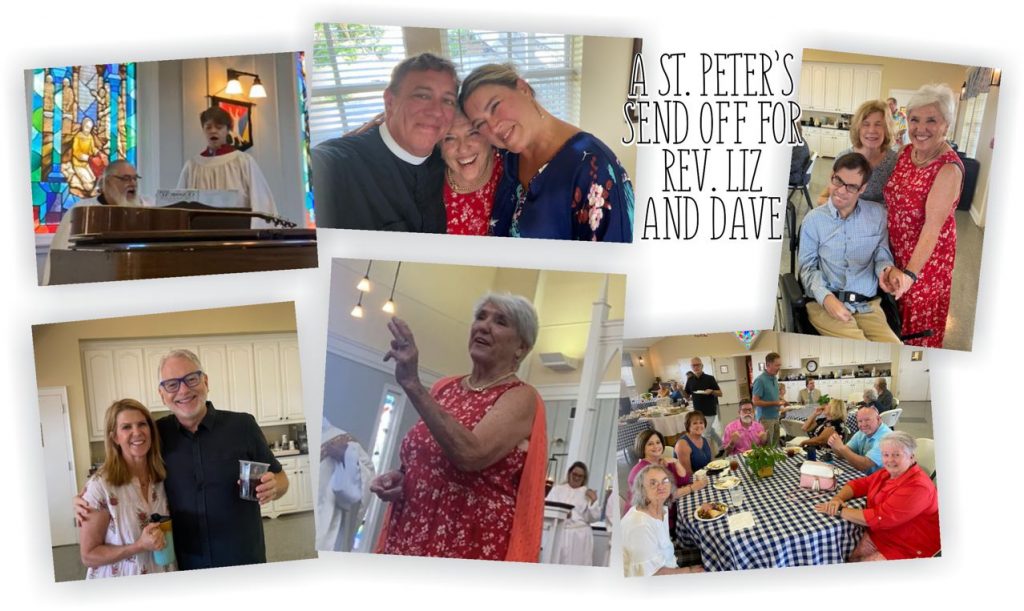 We sure are going to miss Rev. Liz and the talented Dave Jones !
We wish them the very best in this next great adventure they embark in together…
Big Love to you two from your church family by-the-Sea at St. Peter’s.

Memorial Day is a date on the civil calendar when the nation can (and should) honor the the men and women who died in battle on behalf of our nation. The weekend has come to signify things of far less significance: the opening of the public pool, the start of summer, the firing up of the backyard grill, and a day off. But all Americans…  and particularly American Christians…  should stop and think deeply about this weekend, include comments and prayers about it in our worship services, and pastor our nation as we remember those who died in battle.

Really? In honest conversation with younger leaders in the church, they often slightly roll their eyes at these suggestions.  They want to steer clear of any and all vestiges of a “Civil Religion”. They say that America is a no longer a Christian Nation. There is no longer a link between the Bible and the Flag as there once had been. The church and its values are actually disdained by the state. “Cultural Christianity”, “Christendom” is over, or at least hobbled.  Therefore the church has no state-duty to honor the state-sponsored soldiers who died in state-sponsored battles.

Okay. Christians ought to feel beleaguered by the actions and decision of the past 40 years. The culture has changed and, with the help of the education system, the media, the state has turned against traditional values: marriage, sexual morality, sanctity of life, sexual identity, etc. We see it clearly.

But I am not so quick to move away from the opportunity to reach the culture through its symbols and holidays. I think the church and its members have a chance to say something significantly Christian and deeply valuable to the nation on Memorial Weekend Sunday.  In songs and prayers, sermons, announcements, and symbols, I think congregations should touch a few significant points this weekend.

For all these reasons and more, Christ Church always honors and remembers Memorial Day.  Here are some things we have done and some that we will do this weekend in worship.

These are obvious ways the church can observe this important weekend. Memorial Day Weekend can mean far more than the opening of a public pool.  It is a civic holiday, of course. But we can highlight also that it is an intersection between a value of our Christian faith and its surrounding culture. We can minister to God’s people and yet we should always and ultimately point to the Cross of Christ.

TOMORROW: Tuesday, May 31st the Ladies Night Out and Men’s Grillin’ Group will meet

Ladies Night Out – All ladies of the parish are invited to gather at
Salute Italian Restaurant in downtown Gulfport.
We will begin gathering
about 5PM for social hour and dinner at 6PM.
All ladies are invited to join in the fellowship and fun,
meal is “dutch”.

Men’s grillin’ group will meet at 6PM in the Parish hall.
Bring your meat for the grill,
beverage of choice and $15 dues.
Reservations are REQUIRED –
please contact Mike Cassady at 228-326-6601 to RSVP.

Tuesday, May 31st
The Feast of the Visitation

The Collect
Father in heaven, by your grace the virgin mother of your incarnate Son was blessed in bearing him, but still more blessed in keeping your word: Grant us who honor the exaltation of her lowliness to follow the example of her devotion to your will; through Jesus Christ our Lord, who lives and reigns with you and the Holy Spirit, one God, for ever and ever. Amen.

Lesser Feast Days and Fasts for this week

June 2 Blandina and Her Companions, The Martyrs of Lyons, 177

Vacation Bible School returns !!!
June 12 – 16
This year we take a ride on the Redemption Railroad.
Our Destination, Transformation Station.
Sign up using our convenient on-line form!
We need a headcount  ASAP so we can order t-shirts

*** please note, your bill may show a payment to bayou view studio, who is processing our on-line payments.
We will email you a printable ticket upon payment.

Hello to St Peter’s family and friends,
I am trying to see if I can get a group to go to a Shucker’s baseball game.
The dates being considered are on Thursday nights of June 23rd or 30th. Thursday nights are $2 Yuengling drafts, $2 fountain drinks and $2 hotdogs… .YUM!! So let’s cheer on the Shucker’s and have a great time! For now, I want to see how many folks would be interested. Ticket price would start at $12.50 and gets less as the group gets bigger.So if anyone is, send me a text at 469-888-0444 or drop me a email at abbracadabra101@gmail.com and leave a contact name and head count and a phone number.
Thanks,
Dennis Boer

We’re working on our next Musical Mass celebrating the Life and Music of John Prine.

Weekly Worship Schedule
Wednesday Wave
We will have no activities THIS WEDNESDAY while Fr. Patrick is away at CBG’s Special Session.

8:00 am Rite I Deacon’s Mass*
9:30 am Caffeinatin’ and Congregatin’ in the Great Room
9:30 am Kids’ Sunday School
10:30 am Rite II Deacon’s Mass*
In-Person and LIVE Streaming Service*
10:30 am Children’s Church
Child Care Available

ECW News
Giving Boxes to support the United Thank Offering or, UTO.
We ask that they be returned Pentecost Sunday

The Parable of the Talents

Sunday, June 5th
The Parable of the Great Feast

In Luke 14:15-24, Jesus tells the parable of the great banquet and reminds us that God invites us to join Him for a special celebration.

Support our ECW with the purchase of a St. Peter’s Ornament!

Commissioned in 2009, and the 4th in a series of Downtown Gulfport Landmarks, these cast pewter ornaments are the original work of artist Maurice Milleur. Measuring approximately 2 3/4″ tall.
These make great gifts and help support our ECW.
Ornaments are $20/each and may be purchased by contacting any ECW member or the church office.

The Feast of the Visitation

Mary visits her relative Elizabeth; they are both pregnant: Mary with Jesus, and Elizabeth with John the Baptist. Mary left Nazareth immediately after the Annunciation and went “into the hill country … into a city of Judah” (Luke 1:39) to attend to her cousin (Luke 1:36) Elizabeth. There are several possibilities as to exactly which city this was, including Hebron, south of Jerusalem, and Ein Karem. The journey from Nazareth to Hebron is about 130 kilometres (81 mi) in a direct line, probably up to half as far again by road, depending on the route taken. Elizabeth was in the sixth month before Mary came (Luke 1:36). Mary stayed three months, and most scholars hold she stayed for the birth of John. Given the prevailing cultural traditions and needs for security, it is probable that Joseph accompanied Mary to Judah then returned to Nazareth, and came again after three months to take his wife home. The apparition of the angel, mentioned in Matthew 1:19-25, may have taken place then to end the tormenting doubts of Joseph regarding Mary’s maternity.[1]

In the Gospel of Luke, the author’s accounts of the Annunciation and Visitation are constructed using eight points of literary parallelism to compare Mary to the Ark of the Covenant.[2][3]

Some Catholic commentators have maintained that the purpose of this visit was to bring divine grace to both Elizabeth and her unborn child. Even though he was still in his mother’s womb, John became aware of the presence of Christ, and leapt for joy as he was cleansed from original sin and filled with divine grace. Elizabeth also responded and recognized the presence of Jesus, and thus Mary exercised her function as mediatrix between God and man for the first time.[1]

And she [Elizabeth] spoke out with a loud voice, and said, “Blessed [art] thou among women, and blessed [is] the fruit of thy womb. And whence [is] this to me, that the mother of my Lord should come to me? For, lo, as soon as the voice of thy salutation sounded in mine ears, the babe leaped in my womb for joy. And blessed [is] she that believed: for there shall be a performance of those things which were told her from the Lord.”

In response to Elizabeth, Mary proclaims the Magnificat (My soul doth magnify the Lord) Luke 1:46-55.

The word “blessed” is rendered in Greek not by the word “makarios” but as “evlogimeni”, which is the feminine second person singular, used only this once in the New Testament. Its masculine third person singular counterpart “evlogimenos” is used only for Jesus and only on this occasion and when he was welcomed into Jerusalem on Palm Sunday with: “Blessed is he who comes in the name of the Lord“. The masculine/mixed gender third person plural “evlogimenoi” is used by Jesus only when referring to the righteous who are to be raised to life in the Last Judgement.

It is only after the apostles are thrown in jail that God rescues them with a dramatic earthquake. Why does God wait to free them until after they are beaten and persecuted? Why not save them before the trouble? Sometimes God doesn’t intervene on our timeline or in the way that we think would be best for us. But instead of being frustrated or afraid, Paul and Silas continue to trust in God’s faithfulness.

This passage is hugely dramatic. The apostles are flogged and then put in the innermost cell with their feet bound. Their prospects look bleak. Yet despite their wounds, even at midnight they are still praying and singing to God. Their faith is evident to all those around them. Because they’re together, they’re able to support each other until God makes a way.

The jailer and his entire family converting in the face of God’s power is an example of all things working together for good for those who love God (Romans 8:28). God transforms even this enormous hardship into something beautiful.

Did you know there are RCL (Revised Common Lectionary) Readings for each day ?
While there is a little overlap each day, they are posted on-line as a service of the Vanderbilt Divinity Library:
Daily Readings

Daily Readings for this week

Check out our neighboring
Coast Churches

Church of the Redeemer Biloxi

“O God, our heavenly Father, whose glory fills the whole creation, and whose presence we find wherever we go:
preserve those who travel; surround them with your loving care; protect them from every danger;
and bring them in safety to their journey’s end; through Jesus Christ our Lord. Amen.“