The First Sorrow
“The Prophecy of Simeon” -Luke 2:34-35
Then Simeon blessed them and said to his mother Mary, “This child is destined for the falling and the rising of many in Israel, and to be a sign that will be opposed so that the inner thoughts of many will be revealed—and a sword will pierce your own soul too.”
“Ave Maria” by Bach/Gouron performed by Conner Galle, tenor

The Second Sorrow
“The Flight into Egypt” -Matthew 2:13-21
Now after they had left, an angel of the Lord appeared to Joseph in a dream and said, “Get up, take the child and his mother, and flee to Egypt, and remain there until I tell you; for Herod is about to search for the child, to destroy him.” Then Joseph[a] got up, took the child and his mother by night, and went to Egypt, and remained there until the death of Herod. This was to fulfill what had been spoken by the Lord through the prophet, “Out of Egypt I have called my son.”

When Herod saw that he had been tricked by the wise men,[b] he was infuriated, and he sent and killed all the children in and around Bethlehem who were two years old or under, according to the time that he had learned from the wise men. Then was fulfilled what had been spoken through the prophet Jeremiah:

“A voice was heard in Ramah,

Rachel weeping for her children;

she refused to be consoled, because they are no more.”

When Herod died, an angel of the Lord suddenly appeared in a dream to Joseph in Egypt and said, “Get up, take the child and his mother, and go to the land of Israel, for those who were seeking the child’s life are dead.” Then Joseph[d] got up, took the child and his mother, and went to the land of Israel.
“Ave Maria” by Caccini performed by JT Anglin, tenor

The Third Sorrow
“The Loss of the Jesus Child in Jerusalem” -Luke 2:41-50
Now every year his parents went to Jerusalem for the festival of the Passover. And when he was twelve years old, they went up as usual for the festival. When the festival was ended and they started to return, the boy Jesus stayed behind in Jerusalem, but his parents did not know it. Assuming that he was in the group of travelers, they went a day’s journey. Then they started to look for him among their relatives and friends. When they did not find him, they returned to Jerusalem to search for him. After three days they found him in the temple, sitting among the teachers, listening to them and asking them questions. And all who heard him were amazed at his understanding and his answers. When his parents[a] saw him they were astonished; and his mother said to him, “Child, why have you treated us like this? Look, your father and I have been searching for you in great anxiety.” He said to them, “Why were you searching for me? Did you not know that I must be in my Father’s house?”[b] But they did not understand what he said to them.
“Ave Maria” by Cherubini performed by Annika Lunde, soprano

The Fourth Sorrow
“Mary meets Jesus on the Way to Calvary” -John 19:17
…and carrying the cross by himself, he went out to what is called The Place of the Skull, which in Hebrew[a] is called Golgotha.
“Ave Maria” by Shubert performed by Annika Lunde, soprano

The Fifth Sorrow
“Jesus Dies on the Cross” -John 19:18-30
There they crucified him, and with him two others, one on either side, with Jesus between them. Pilate also had an inscription written and put on the cross. It read, “Jesus of Nazareth,[a] the King of the Jews.” Many of the Jews read this inscription, because the place where Jesus was crucified was near the city; and it was written in Hebrew,[b] in Latin, and in Greek. Then the chief priests of the Jews said to Pilate, “Do not write, ‘The King of the Jews,’ but, ‘This man said, I am King of the Jews.’” Pilate answered, “What I have written I have written.” When the soldiers had crucified Jesus, they took his clothes and divided them into four parts, one for each soldier. They also took his tunic; now the tunic was seamless, woven in one piece from the top. So they said to one another, “Let us not tear it, but cast lots for it to see who will get it.” This was to fulfill what the scripture says,

“They divided my clothes among themselves,
and for my clothing they cast lots.”
And that is what the soldiers did.

After this, when Jesus knew that all was now finished, he said (in order to fulfill the scripture), “I am thirsty.” A jar full of sour wine was standing there. So they put a sponge full of the wine on a branch of hyssop and held it to his mouth. When Jesus had received the wine, he said, “It is finished.” Then he bowed his head and gave up his spirit.
“Ave Maria” by Saint Saëns performed by Lawrence Galle, tenor

The Sixth Sorrow
“Mary holds the lifeless body of Christ in her arms” -John 19:39-40
Nicodemus, who had at first come to Jesus by night, also came, bringing a mixture of myrrh and aloes, weighing about a hundred pounds. They took the body of Jesus and wrapped it with the spices in linen cloths, according to the burial custom of the Jews.
“Ave Maria” by Donizetti performed by Tor Lunde, bass & Connor Galle, tenor

The Seventh Sorrow
“Jesus is laid in the tomb” -John 19:40-42
They took the body of Jesus and wrapped it with the spices in linen cloths, according to the burial custom of the Jews. Now there was a garden in the place where he was crucified, and in the garden there was a new tomb in which no one had ever been laid. And so, because it was the Jewish day of Preparation, and the tomb was nearby, they laid Jesus there.
“Ave Maria” Gregorian Chant performed by JT Anglin, tenor 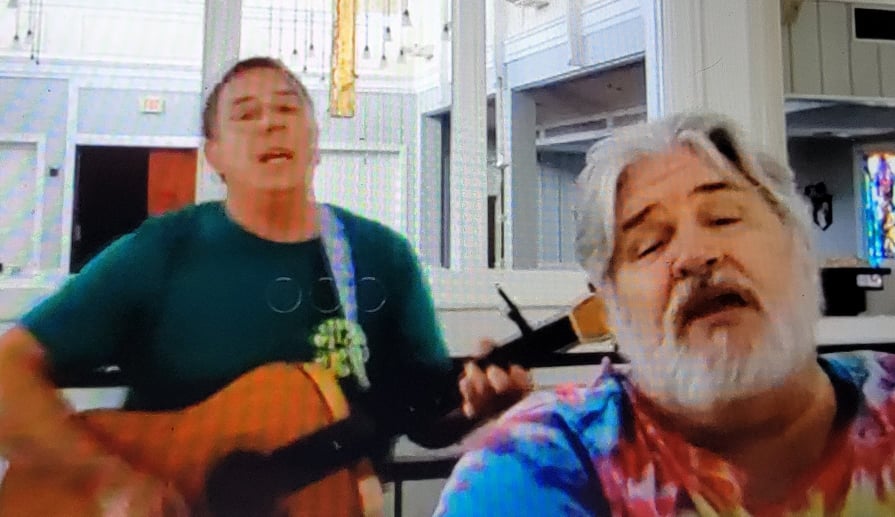 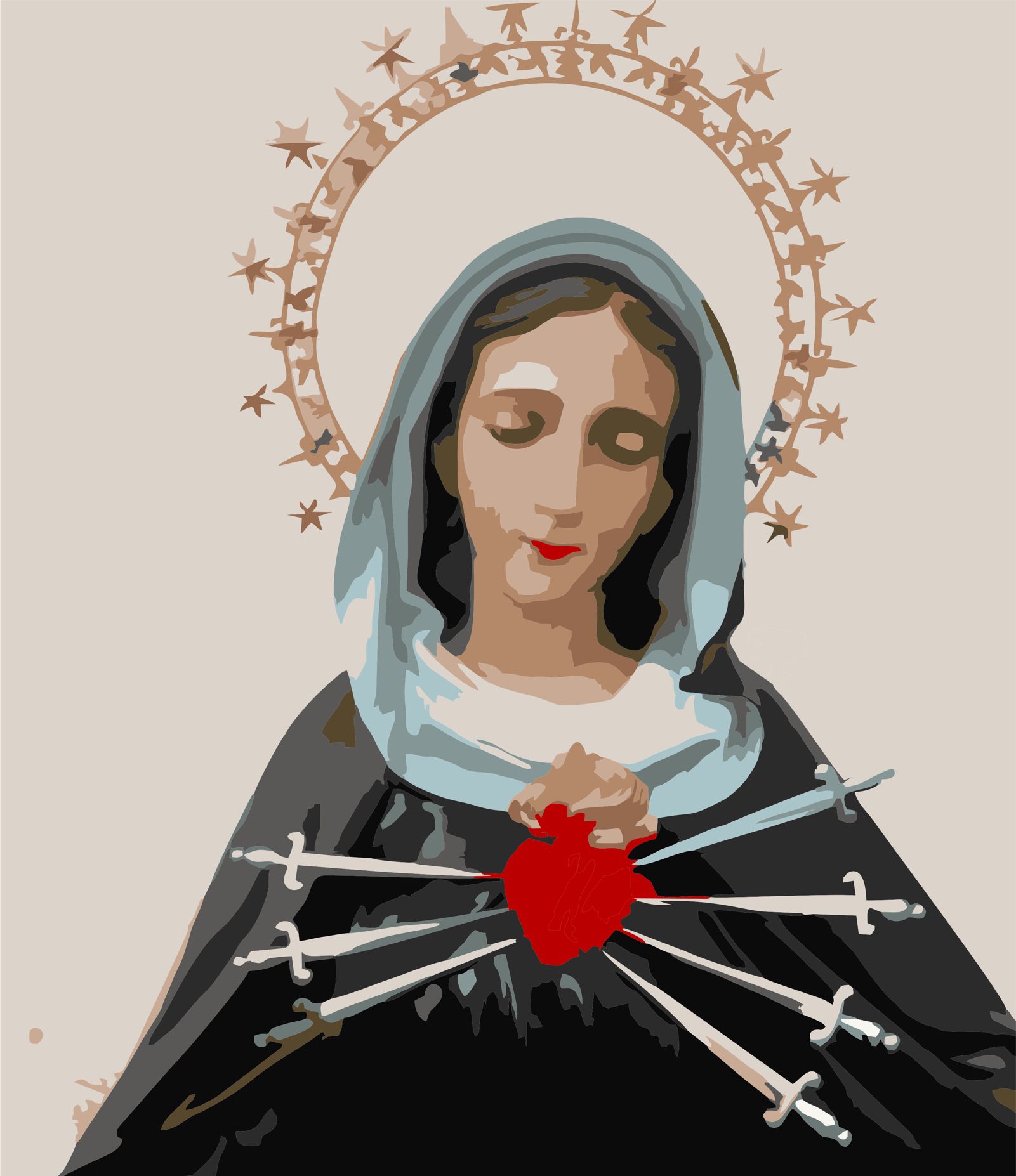