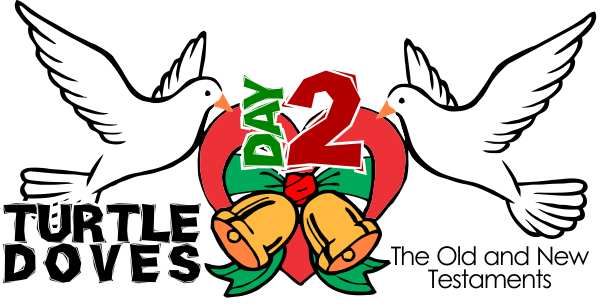 These Two Turtle Doves incorporate painting and stitching. Inspired by embroidered felt birds, this pair has been simplified for a variety of skill levels. From coloring and connecting the dots, or stitching the feathers, these representations of the Old and New Testaments make nice additions to the refrigerator (ha!) or might hang in a window.

Symbolism of the Turtle Doves

The flowers appear on the earth; the time of the singing of birds is come, and the voice of the turtle is heard in our land; (Song of Solomon 2:12 KJV)

The turtle-dove is a name of endearment for one beloved, in Son. 2:12. It is the prayer of a people beloved by God that he would not deliver them to their enemies.  John Wesley’s Explanatory Notes says of Song of Son. 2:12 : “The flowers – The communications of God’s grace, the gifts, and graces, and comforts of the Holy Spirit, are vouchsafed unto, and appear in believers, as buds and blossoms do in the spring. The turtle – This seems particularly to be mentioned because it not only gives notice of the spring, but aptly represents the Spirit of God, which appeared in the shape of a dove, and which worketh a dove – like meekness, and faithfulness, in believers.”

European Turtle Doves have long been a symbol of Christmas holiday celebrations. Best known for the song, “The Twelve Days of Christmas,” the turtle dove’s first connection to the Christian holiday actually dates back to the birth of Jesus as depicted in the Bible. Representing innocence, purity and enduring love, turtle dove lore throughout the ages is well documented.
The general term “turtle dove” does not actually refer to any one specific bird, but rather a group of doves. Here in the United States  you are most likely to see the Mourning Dove and the Ringed Turtle Dove in your back yard depending on where you live.

A distinctive band of color on the top of the neck makes it look like the dove is capable of drawing its head into the neck, like a turtle – hence the term turtle dove.  Their call sounds like “coooo-woo-woo-woooo” and is often mistaken for an owl. Once two get together they form a strong pair bond that can last several seasons. Turtle Doves are not huge fans of snails or insects instead preferring to munch on seeds. They will even eat a bit of gravel or sand from time to time to help with digestion. Though they love to visit bird feeders, they are most often seen foraging for food on the ground. Whether it’s up on the feeder or down on the ground, they are always pleasant to watch.

Known for their gentle nature and lasting bonds, European Turtle Doves are the perfect symbol for all things Christmas.

~ Xacto Knife or something to poke holes with. (have an adult help)

~ Needle and Thread, twine or yarn. 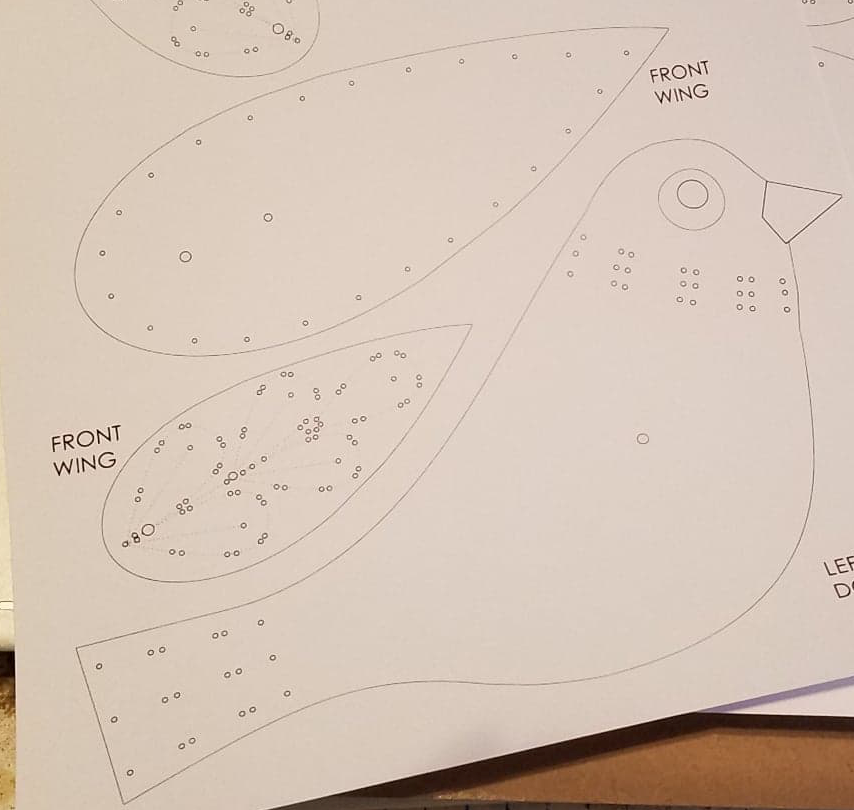 Begin by printing the PDF file on Cardstock

Color your pieces BEFORE cutting them out. Here we used watercolor but you can color with markers, crayons or colored pencils.
*You could ALSO print on colored cardstock 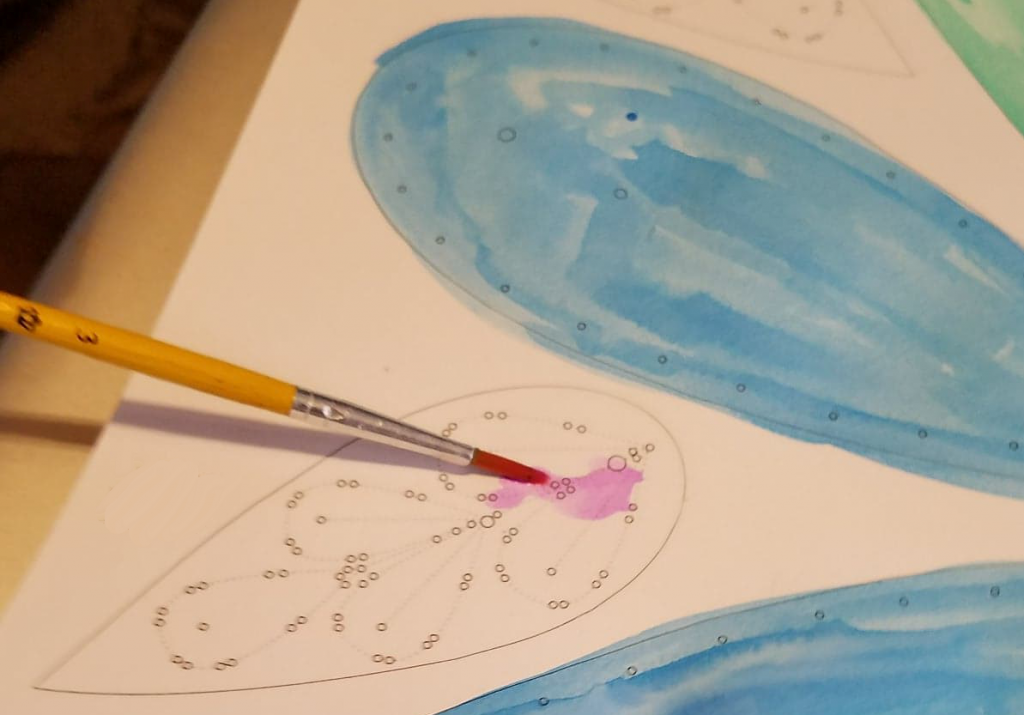 Next, draw in  the detail with a marker.
*NOTE: Instead of marking you could make holes and stitch the detail later. 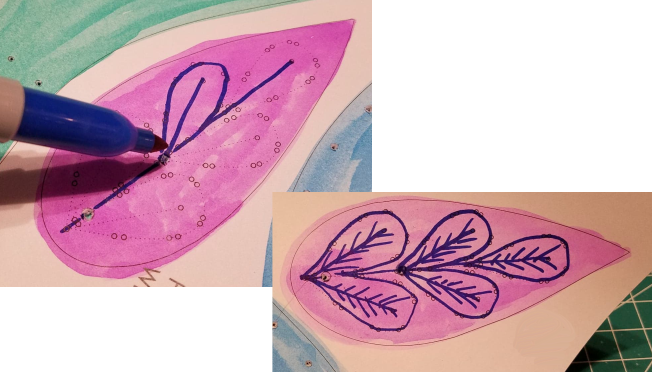 Make the holes for “stitching” using an exacto knife or the end of a compass.
*** HAVE AN ADULT HELP WITH THIS STEP !!!

OPTIONAL:
If you chose to stitch the wing, make those holes now. 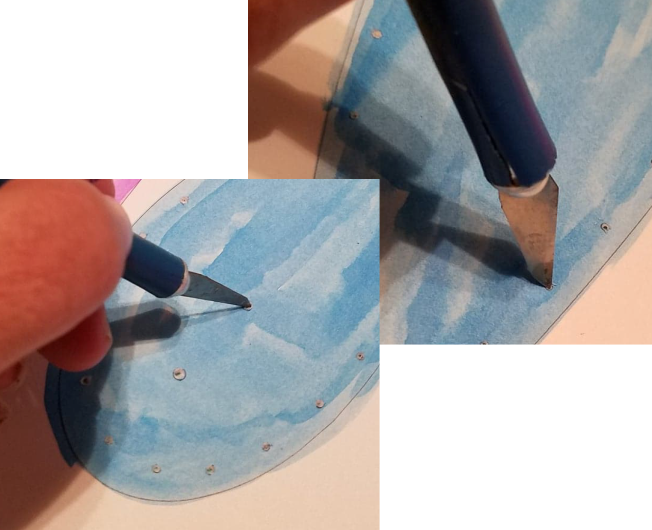 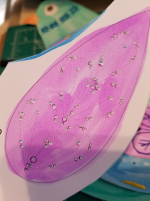 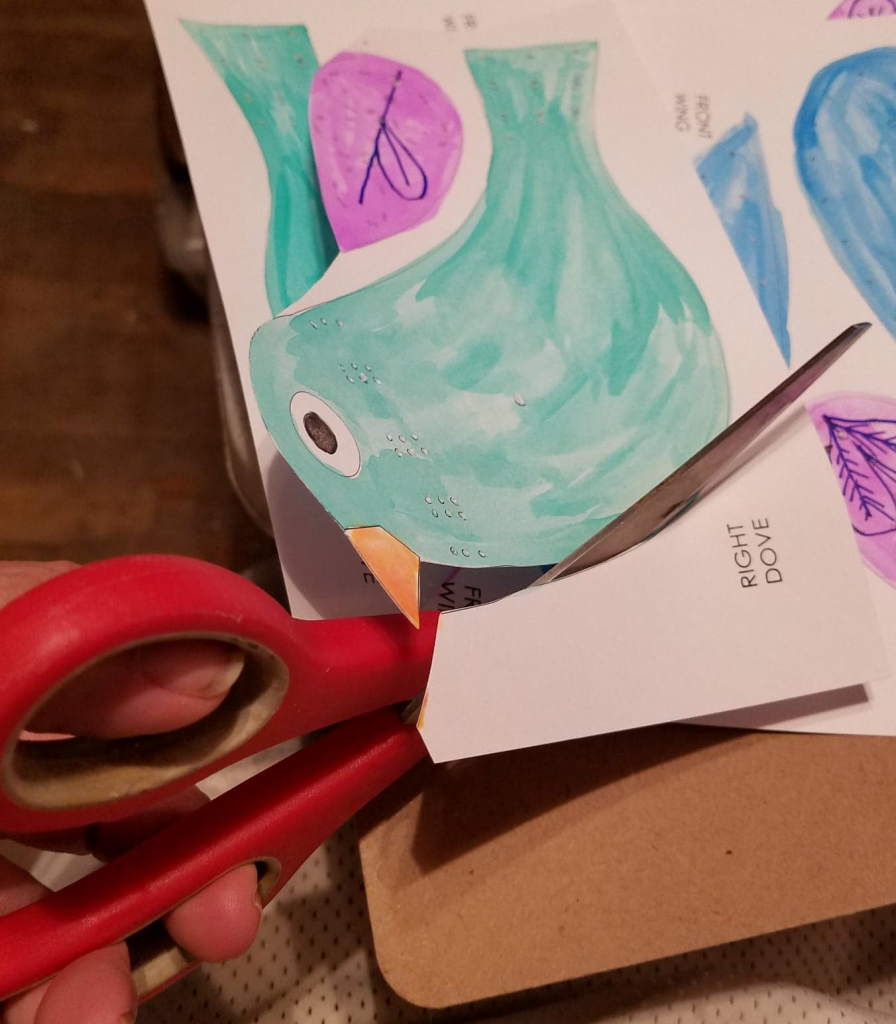 NOW, cut each piece out

You will have 2 of each piece, colored with the hole ready. 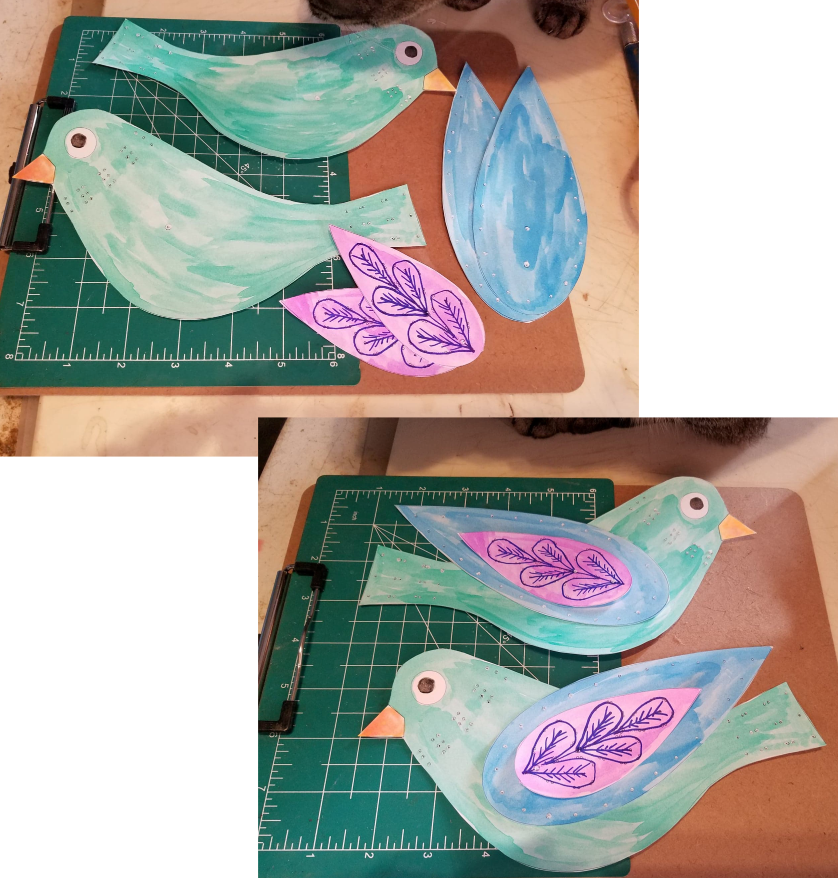 Get your thread and needle ready.
(Cat help optional) 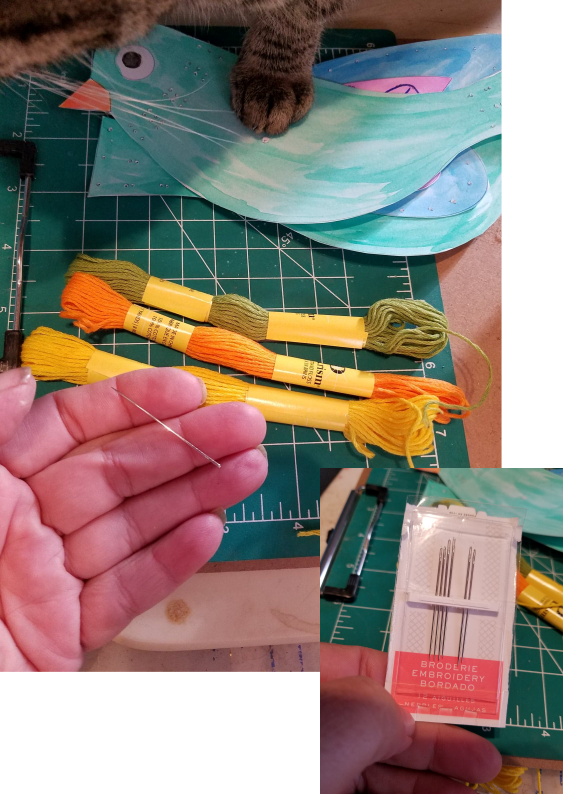 Make a knot at the end of your thread then poke your needle through the hole and pull through.

Continue stitching around the entire wing. Repeat for both wings, 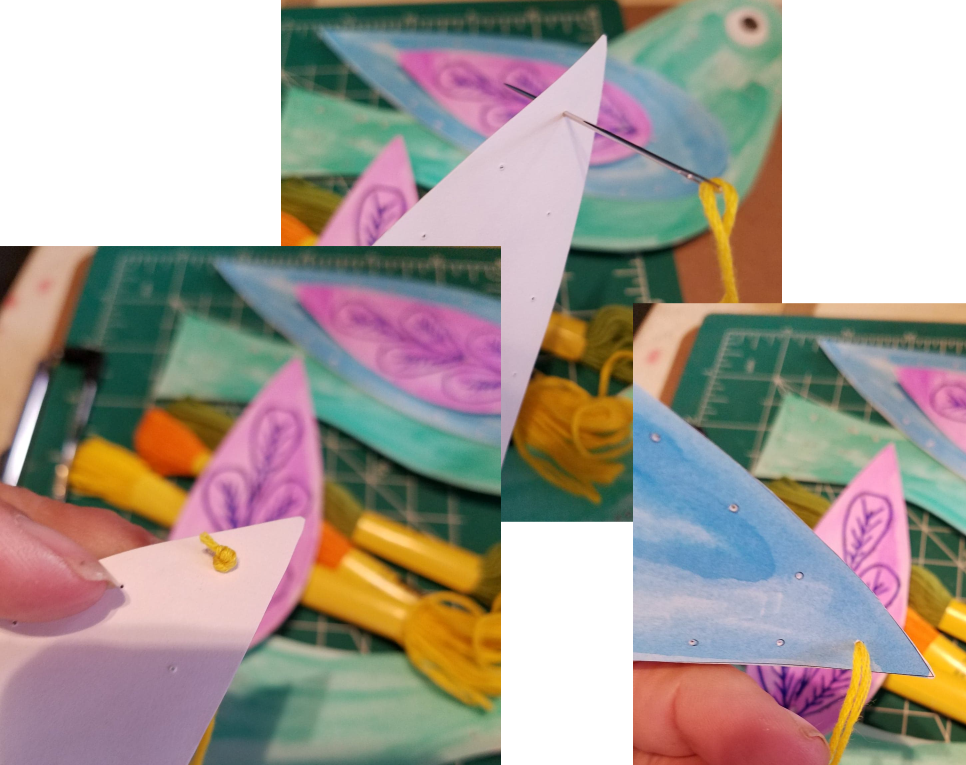 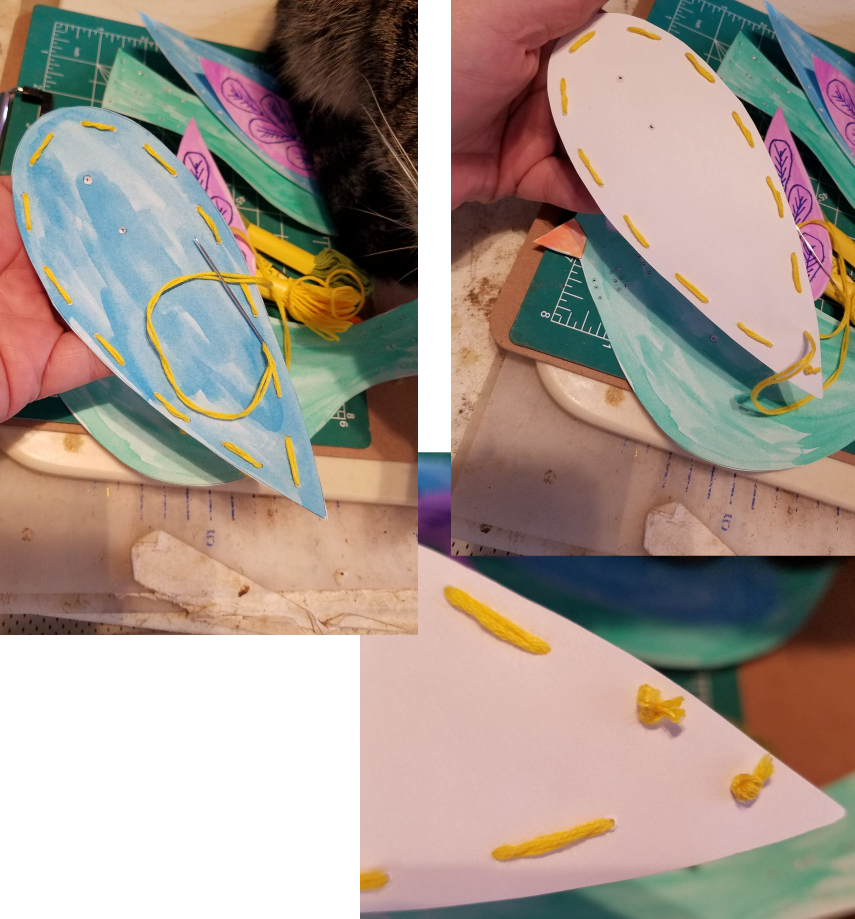 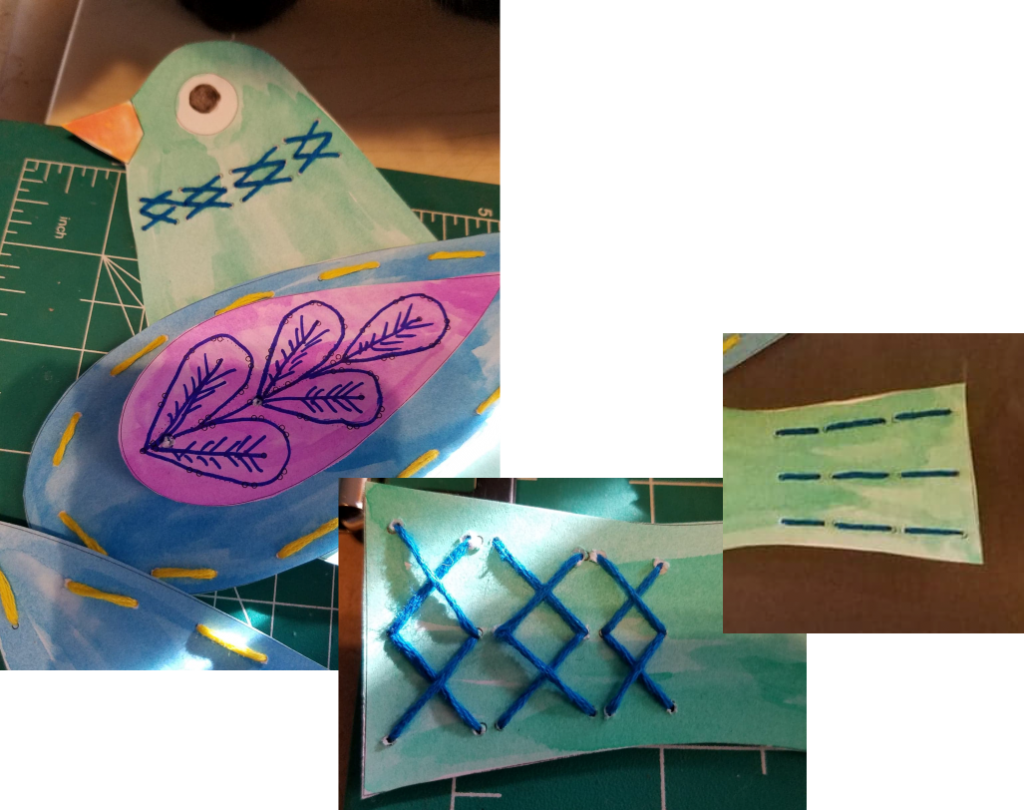 Next stitch the neck and tail details. Get creative!
OR, for the younger kids,  just connect the dots with a marker. 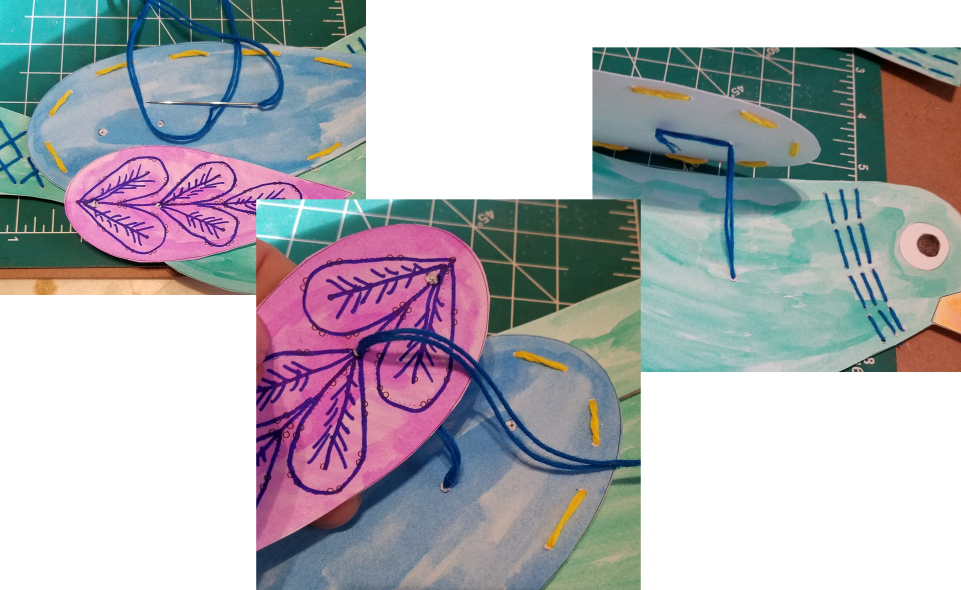 Knot on the back. If you can’t knot close, just use a piece of tape. 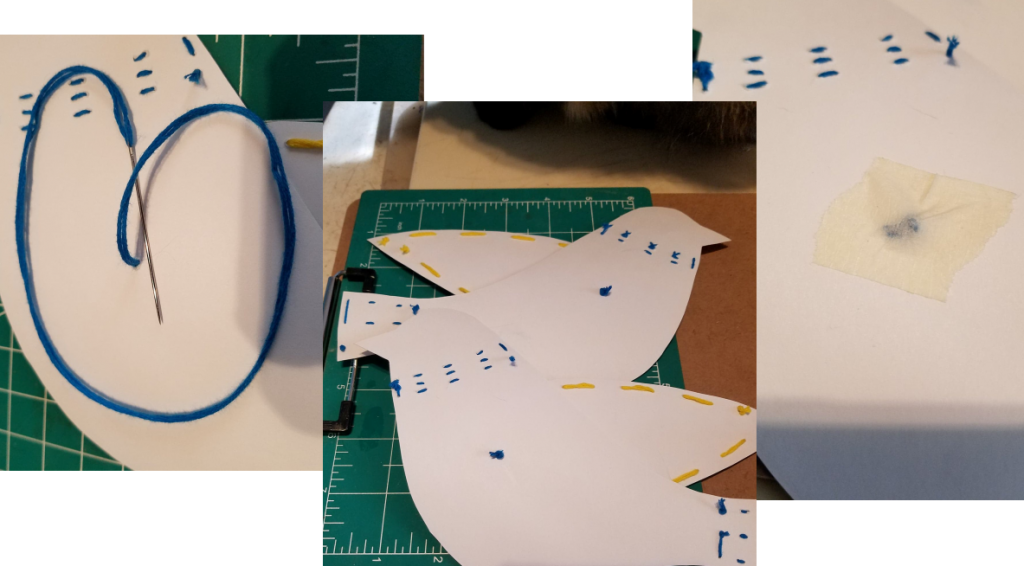 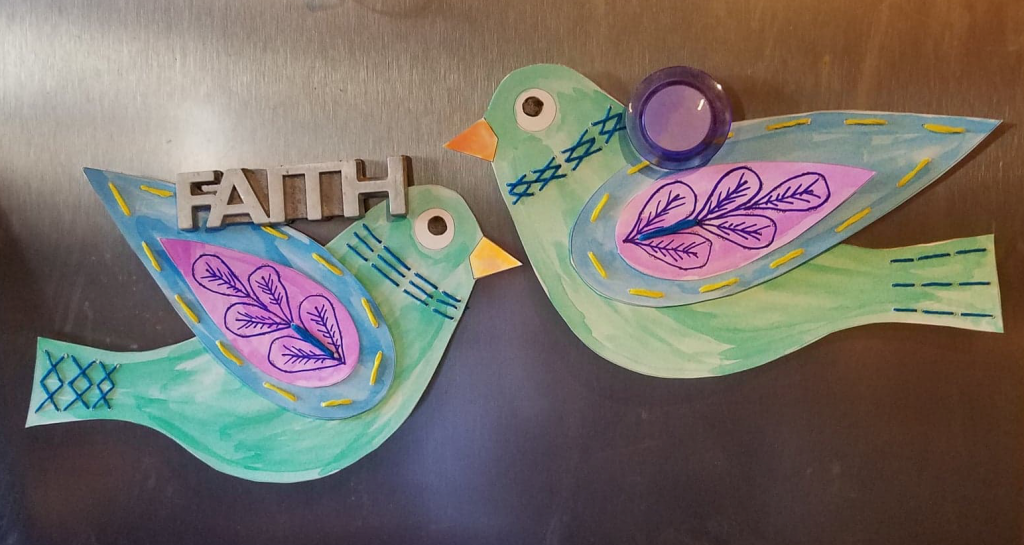 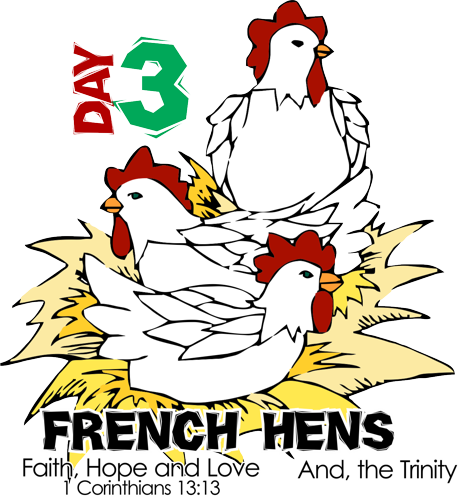